Home Movies & Books The 50 Greatest Movies to Watch, According to Critics 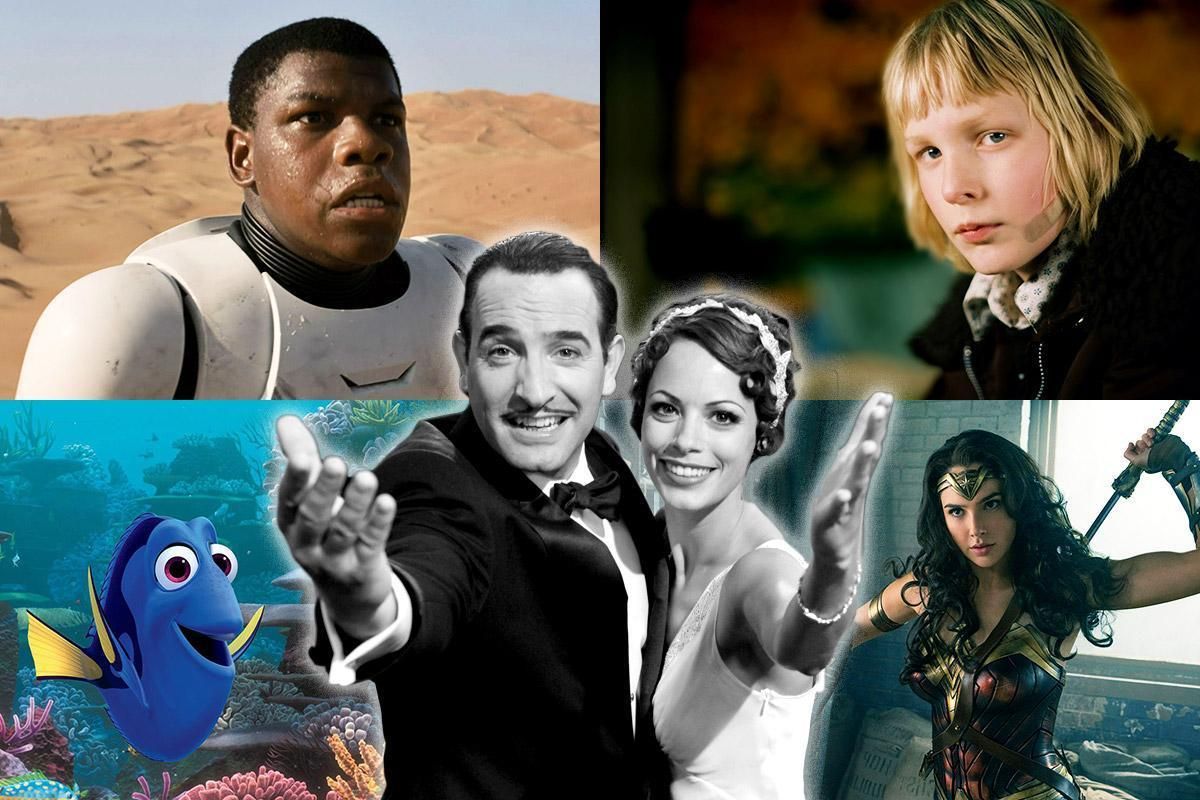 Nobody knows Hollywood better than Hollywood itself. Although it is always difficult to reach a consensus for the number one position, there will always be lists of all kinds. Movie lists according to different categories, whatever comes to mind who makes them, and among so many lists, some gain more importance than others depending on how they were made. When it comes to making one from within the movie industry, The Hollywood Reporter found a way to bring together the titles that the people who work there consider to be the best of the best.

To achieve this, the outlet sent the forms / surveys to every Hollywood movie studio, agency, advertising firm, and production company. It goes without saying, but it is interesting to know that not everyone was amused. Nonetheless, a total of 2,120 industry members agreed to share their responses, including Alan Horn , Walt Disney Studios Creative Director and Co-Chairman, Jim Gianopulos, Paramount Pictures President and CEO, Sue Kroll , Warner Bros. executive and production company, and film director Gary Ross, so we can’t expect anything less than Hollywood’s top 100 movies of all time.

The 50 Greatest Movies to Watch, According to Critics

There are many household names on the list of one hundred movies. Among the directors the one who appears the most is Steven Spielberg, who incidentally has some of his movies within the top twenty. In terms of actors, Marlon Brando is the one who appears in a greater number of movies than were considered by voters to be in five of them, but Jack Nicholson and Robert De Niro followed closely with four movies.

Any of the main lists that classify the best movies of all time – such as the American Film Institute’s “100 years, 100 movies” of the year 1998 – has ordered the names of thousands of movies to agree on which are the classics of cinema.

When movie reviews are the only factor taken into account to organize that ranking, the results become surprising.

To find out which movies have been the most critically acclaimed, we have used the opinion aggregator Metacritic to compile the ranking, which measures movies by their set of reviews.

Here you can see which are the 50 best movies of all time, according to the opinions of Metacritic:

Plot Summary: “The lives of two mob men, a boxer, a gangster’s wife, and a pair of restaurant robbers are intertwined in four tales of violence and redemption.”

Plot summary: “A former prisoner of war is brainwashed into an unwitting murderer in the service of an international communist conspiracy.”

Plot summary: “A mentally unstable former soldier works as a night taxi driver in New York, where the atmosphere of decadence fuels his need to act violently while trying to free a 12-year-old prostitute.”

Plot summary: “A married couple ready to celebrate their wedding anniversary receives shocking news that will change the course of their lives forever.”

Plot summary: “A senator who rose to fame for killing a notorious outlaw returns for the funeral of an old friend and tells the truth about his feat.”

Plot summary: “Dunkirk is about the hundreds of thousands of British and Allied troops who were surrounded by enemy forces. Trapped on a beach with the sea blocking their way, they face an impossible situation as the enemy approaches.”

Plot summary: “We meet Jesse and Celine nine years later in Greece. Almost two decades have passed since their first meeting on that train to Vienna.”

Plot summary: “In the distant future, a small recycling robot inadvertently embarks on a space journey that will decide the fate of humanity.”

Plot summary: “A married couple faces a difficult decision – to improve the lives of their children by moving to another country or to stay in Iran and take care of the fragile health of a parent with Alzheimer’s.”

Plot Summary: “A chronicle of the decade-long manhunt of Al-Qaeda terrorist leader Osama Bin Laden following the September 2001 bombings and his death at the hands of the Navy SEAL in May 2011.

Plot summary: “Exiled in a dangerous forest by her stepmother, a princess is rescued by seven mining dwarves who offer her shelter.”

Plot Summary: “Writer James Baldwin tells the history of races in modern America with his unfinished novel, Remember This House .”

Summary of the argument: “Harvard student Mark Zuckerberg creates the social network that would be known in the future as Facebook, but is sued by two brothers who claim that he had stolen the idea and the co-founder who was later removed from the business.”

Plot summary: “A humble family in the American Midwest is forced to abandon their lands. They travel to California, suffering the setbacks of homelessness during the Great Depression.”

Plot summary: “A cowboy doll feels out of place and jealous when a new spaceman doll snatches its owner’s favorite toy stall.”

Plot summary: “A young woman whose father has been captured by a terrifying beast offers to replace him without knowing that her captor is actually a prince whose appearance has been altered by a spell.”

Plot summary: “During her family’s move to the suburbs, a 10-year-old girl travels through a world populated by gods, witches and spirits where humans have turned into beasts.”

Plot summary: “A biomedical engineer and an astronaut cooperate to survive after an accident that leaves them adrift in space.”

Plot summary: “A petty criminal aspires to rise in the mafia in his area.”

Plot Summary: “The troubled Blanche DuBois moves with her sister to New Orleans and is tormented by her brutal stepbrother as her reality crumbles around her.”

Plot summary: “A rat that can cook makes a strange alliance with a young kitchen worker in a famous restaurant.”

Plot summary: “A mad general tries to provoke a nuclear holocaust that the rest of the generals and politicians try to stop.”

Plot summary: “A private detective accepts a case that ends up involving him with three eccentric criminals, a great liar and his mission for a priceless statuette.”

Plot summary: “A young couple moves into an apartment with peculiar neighbors. When the woman becomes mysteriously pregnant, paranoia about the safety of her unborn child begins to control her life.”

Plot summary: “A depressed uncle must take care of his nephew after the boy’s father dies.”

Plot summary: “A member of a jury tries to prevent a failure of justice forcing his companions to reconsider the evidence.”

Plot summary: “In medieval Japan an old feudal lord retires, splitting his empire among his three sons. He greatly underestimates how the new power acquired will corrupt his sons and turn them against each other.”

Plot summary: “A couple of recent high school graduates spend one last night partying with their colleagues before going to college.”

Plot summary: “A Phoenix secretary embezzes $ 40,000 from one of her boss’s clients and goes on the run. Stops to rest at a remote motel run by Norman Bates, a young man under the influence of his mother.”

Plot summary: “When two male musicians witness a mafia fight, they flee the state disguised as members of a female marching band, but things get complicated.”

Plot summary: “A woman assists her friend to have an illegal abortion in Romania in the 1980s.”

Plot Summary: “A southern beauty struggles with the devastation of the Civil War and Reconstruction. This classic won eight Academy Awards, including Best Picture.”

Plot summary: “True story of the cerebral palsy patient Christy Brown, who overcame his illness and poverty to become an artist, poet and writer.”

Plot summary: “A documentary that follows the lives of two Chicago youths struggling to become college basketball players with the goal of becoming professionals.”

Plot summary: “A naive joins the theater company of a reputed but old actress and her circle of friends from the show.”

Plot summary: “A New York marketing director is mistaken for a government agent by a group of foreign spies and is hunted across the country as he searches for a way to survive”,

Plot summary: “In Franco’s Spain in 1944, the young daughter of a sadistic army officer escapes to a mysterious but captivating fantasy world.”

Plot Summary: “A story of human connection and self discovery, Moonlight tells the life of a young black man from childhood to adulthood as he struggles to find his place in the world living in a tough Miami neighborhood.”

Plot summary: “Fred Dobbs and Bob Curtin, two Americans looking for work in Mexico, convince an old prospector to help them search for the precious metal in the Sierra Madre mountains.”

Plot summary: “End of a trilogy dealing with contemporary French society, a model discovers that her neighbor is invading people’s privacy.”

Plot summary: “A casino owner in Casablanca, Morocco, protects from the Nazis in 1941 her former lover and husband, a Czech guerrilla.”

Plot summary: “A photographer in a wheelchair spies on his neighbors from the window of his flat and is convinced that one of them has committed a murder.”

Plot summary: “The old patriarch of an organized crime family passes control of his underground empire to his reluctant son.”

Plot summary: “After the death of a news mogul, journalists investigate to find out the meaning of his last words.”

Usually when you Google the names of the best movies of all time, there is no middle ground. You find countless outdated movie lists or dozens of totally far-fetched titles and feel like you’ve missed a lot or maybe you have bad taste. This article is not just one of those, since the fifty feature films included are from all eras and range from black and white to the most recent color film, which according to the consensus of film critics deserves so much to be in this list like any of those that are already classics and are part of it.

The history of the seventh art is full of great movies that have endured despite the passage of time and also contemporary works that have changed or meant a revolution in the way film is made or the way in which film directors They had been telling stories, but they are all cinematographic triumphs that improve with each reproduction and allow the viewer to discover more layers or particularities of stories in which a group of people worked with great effort and care to the details so that the vision they shared reaches intact the big screen.