Home Life Top 30 Most Visited Museums In The World 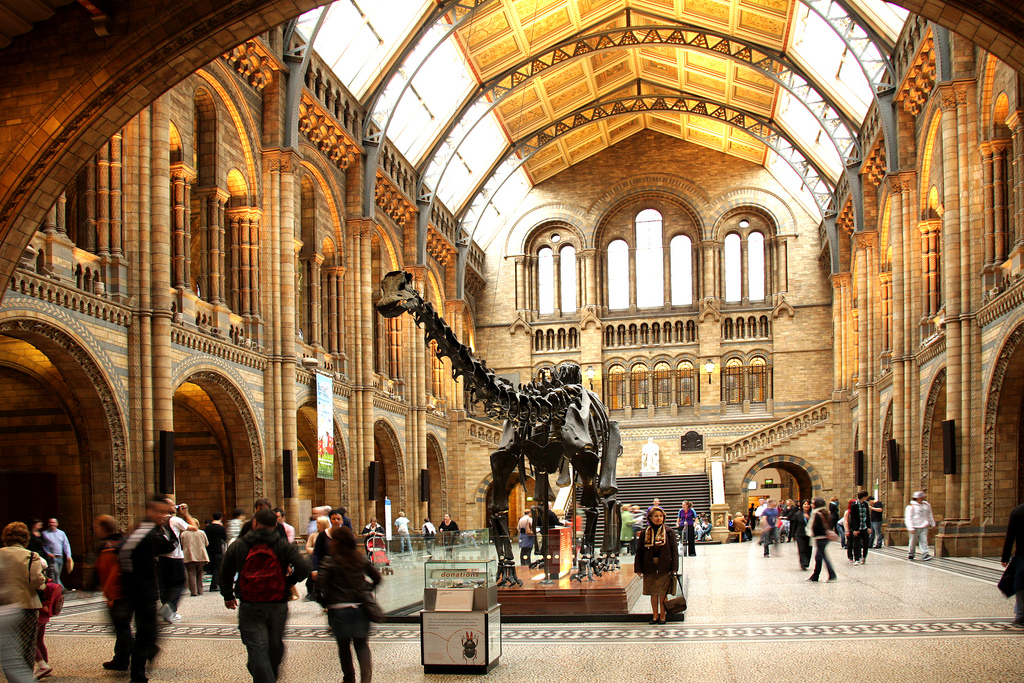 Visiting the most important museums in each city is one of the main activities of travelers who like art, culture and history. However, there are some iconic museums that have become indispensable regardless of the traveler’s interests. It is unthinkable, for example, to go to Paris and not visit the Louvre, which by the way has been positioning itself as the most visited museum in the world for several years, with 9.3 million visitors just last year.

How many museums are there in the world? It is obviously a difficult question and no one seems to have a definitive answer, but according to ICOM, the answer is at least 55,000.

And which of them is the world’s favorite? One way to find out is to look at the visitor numbers …

The Louvre is obviously the most visited museum in the world, with over 10 million visitors every year, curious to see Aphrodite, known as the “Venus de Milo”; the “Regent” diamond; the code of law of Hammurabi, king of Babylon; the portrait of Louis XIV; Mona Lisa; the Portrait of a Woman, known as “L’Européenne and other masterpieces.

This list features the 30 most visited museums in the world. The United Kingdom is the most present nation with 8 museums and to suggest France with 4.

The first museum on the list is the Shanghai museum. With over 2 million visitors a year it is the thirtieth most visited museum in the world. The Shanghai Museum is a museum of ancient Chinese art, located on People’s Square in the Huangpu District of Shanghai, China. Rebuilt to its current location in 1996, it is considered to be one of China’s first world-class modern museums.

The Tretyakov Gallery is an art gallery in Moscow, Russia, the leading repository of Russian fine art in the world.

The Van Gogh Museum is a Dutch art museum dedicated to the works of Vincent van Gogh and his contemporaries in Amsterdam; it is located in the Museum Square in the South Amsterdam district, near the Stedelijk Museum, the Rijksmuseum and the Concertgebouw.

Finally an Italian location… The Uffizi Gallery is an important art museum located adjacent to Piazza della Signoria, in the historic center of Florence, in the region of Tuscany, Italy.

The Rijksmuseum is a Dutch national museum dedicated to the arts and history of Amsterdam. The museum is located in the Museum Square in the South Amsterdam district, near the Van Gogh Museum, the Stedelijk Museum in Amsterdam and the Concertgebouw.

The historic Old Patent Office Building in Washington, DC covers an entire block defined by F and G Streets and 7th and 9th Streets NW in Chinatown. It was one of the first US patent office buildings

Visit the official website (in English) of the Tokyo National Museum

The National Gallery of Victoria, popularly known as NGV, is an art museum in Melbourne, Victoria, Australia. Founded in 1861, it is Australia’s oldest, largest and most visited art museum.

Visit the official website of the National Gallery of Victoria

The National Art Center is a museum in Roppongi, Minato, Tokyo, Japan. Joint project of the Cultural Affairs Agency and the Independent Administrative Institute of National Museums, located on a site previously occupied by a research facility of the University of Tokyo

The Museum of Modern Art (MoMA) is an art museum located in Midtown Manhattan, New York City, on 53rd Street between Fifth and Sixth Streets. It plays an important role in the development and collection of modern art and is often identified as one of the largest and most influential museums of modern art in the world.

The Tokyo Metropolitan Art Museum is an art museum in Tokyo, Japan. It is one of the many Japanese museums that are supported by a prefectural government. The current structure, designed by Kunio Maekawa, was completed in 1975. The museum is located in Ueno park.

The Moscow Kremlin, or simply the Kremlin, is a fortified complex in central Moscow, overlooking the Moskva River to the south, St. Basil’s Cathedral and Red Square to the east, and Alexander Garden to the west.

Somerset House is a large neoclassical building located on the south side of the Strand in central London, overlooking the Thames, east of Waterloo Bridge. The Georgian quadrilateral, which was built on the site of a Tudor palace belonging to the Duke of Somerset, was designed by Sir William Chambers in 1776. It was further extended with Victorian outer wings to the east and west in 1831 and 1856 respectively.

The Musée d’Orsay is a museum in Paris, France, on the left bank of the Seine. It is housed in the former Gare d’Orsay, a Fine Arts train station built between 1898 and 1900. The museum mainly houses French art dating from 1848-1914, including paintings, sculptures, furniture and photography.

The National Museum of Korea is the flagship museum of Korean history and art in South Korea and is the cultural organization that represents Korea.

The Center Pompidou, also known as the Center Pompidou in English, is a building complex in the Beaubourg area of ​​the 4th arrondissement of Paris, close to Les Halles, rue Montorgueil and the Marais

The Prado Museum, officially known as the Museo Nacional del Prado, is the main Spanish national art museum, located in the center of Madrid.

The National Palace Museum, located in Taipei and Taibao, Chiayi County, Taiwan, has a permanent collection of nearly 700,000 pieces of ancient Chinese imperial artifacts and artwork, making it one of the largest of its kind in the world.

Don’t miss our article Must-See Places In The World To Visit At Least Once In Your Life.

The Museo Nacional Centro de Arte Reina Sofia is Spain’s national museum of 20th century art. The museum was officially opened on 10 September 1992 and is named for Queen Sofia. It is located in Madrid, near the Atocha train and metro stations, at the southern end of the so-called Golden Triangle of art.

“A visit to a museum is a search for beauty, truth, and meaning in our lives. Go to museums as often as you can.” – Maira Kalman – More Quotes

The Victoria and Albert Museum in London is the world’s largest museum of applied and decorative arts and design, as well as sculpture, which houses a permanent collection of over 2.27 million objects. It was founded in 1852 and was named after Queen Victoria and Prince Albert.

The State Hermitage Museum is a museum of art and culture in St. Petersburg, Russia. The second largest art museum in the world, it was founded in 1764 when Empress Catherine the Great bought an impressive collection of paintings from the Berlin merchant Johann Ernst Gotzkowsky. The museum celebrates the anniversary of its foundation every year on December 7, the day of Saint Catherine. It has been open to the public since 1852.

The Galleria campus includes the original neoclassical west building designed by John Russell Pope, which is connected underground to the modern oriental building, designed by IM Pei, and the 25,000m2 sculpture garden. The Gallery often features special temporary exhibitions that span the world and art history. It is one of the largest museums in North America.

The National Gallery is an art museum on Trafalgar Square in the City of Westminster in central London. Founded in 1824, it houses a collection of over 2,300 paintings dating from the mid-13th century to 1900.

You would also like: The World’s 50 Best Restaurants to visit.

The British Museum, in the Bloomsbury area of ​​London, UK, is a public institution dedicated to human history, art and culture. Its permanent collection of around eight million works is among the largest and most complete in existence, having been widely found during the era of the British Empire.

Tate Modern is a modern art gallery located in London. It is the British national gallery of international modern art and is part of the Tate group. It is based in the former Bankside Power Plant, in the Bankside area of ​​the London Borough of Southwark.

Vatican City, a city-state surrounded by Rome, is the headquarters of the Roman Catholic Church. It is the pope’s homeland and an ensemble of iconic art and architecture. Its Vatican Museums house ancient Roman sculptures such as the famous “Laocoon and his sons”, as well as Renaissance frescoes in the Raphael Rooms and in the Sistine Chapel, famous for Michelangelo’s ceiling.

The Metropolitan Museum of Art in New York City, colloquially “the Met,” is the largest art museum in the United States. With 6,953,927 visitors to its three locations in 2018, it was the third most visited art museum in the world.

Visit the website (in English) of the Metropolitan Museum of Art

The National Museum of China flanks the eastern side of Tiananmen Square in Beijing, China. The museum’s mission is to educate about the art and history of China. It is headed by the Ministry of Culture of the People’s Republic of China.

What is the most visited museum in the world?

The Louvre, or the Louvre Museum, is the largest art museum in the world and a historic monument in Paris, France. A central landmark of the city, it is located on the right bank of the Seine in the 1st arrondissement of the city.

The 50 Most Important Historical Figures

What Makes Men Attractive To Women? – 15 Qualities And Traits...

The Ultimate Guide To Digital Marketing – Strategies And Smart Plans

The Definitive List Of College Dorm Essentials – What To Bring...

New Upcoming Movies 2022 – The Most Anticipated And Blow Minding...

100+ Sexting Lines To Initiate A Sexy Conversation – Everything You...

What Makes Men Attractive To Women? – 15 Qualities And Traits...

The Ultimate Guide To Digital Marketing – Strategies And Smart Plans

2000s Fashion – History And The Most Fashionable Trends Of The...