Home Fashion & beauty The Greatest 90s Fashion Trends – The Most Beautiful Looks Of The... 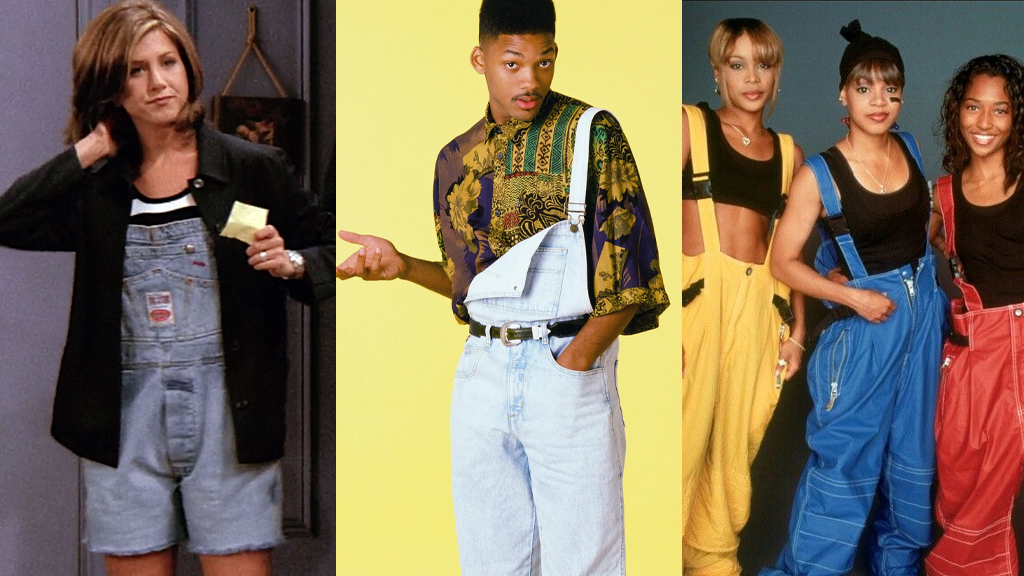 More hype than ever, the 1990s injected a powerful vintage air into the fashion of the day. Choker necklace, mom jeans, crop top, bomber and platform shoes? All emerge from this decade punctuated by the pop sounds of the Spice Girls and infused with teen fashion from the cult Beverly Hills series. Almost 30 years later, we take a look back at the heritage of ten years of daring fashion, alternately pop & rock and girly-nunuche, which never ceases to make its revival, inspiring the most cutting-edge labels in the fashionsphere.

In the nineties, Brandon, Brenda, Kelly, Donna, Steve and Dylan set the tone for fashion.

It is said that at the end of the broadcast of each episode, teenagers rushed into the shops to copy the outfit of their idols in detail. That is? Carrot-washed denim pants, basic t-shirts, hair scrunchies, mini dresses. Beverly Hills 90210 marked a whole generation.

The story full of rhinestones and sequins of the twins, Brenda and Brandon, who, disembarking from their native Minnesota, land in the upscale neighborhood of Beverly Hills. From meetings to friendships, they form a tight-knit band of friends who quarrel, love each other, break up, wonder, over the 10 seasons, 294 episodes, which will hold the whole world in suspense between 1990 and 2000 until that the main characters leave high school to become adults.

The fashion of the 90s is something that we do not forget. When we see the looks of the Spice Girls or bring out our old stuff, we hallucinate a little. However, the nineties trend keeps coming back to the fore. In recent seasons, we have seen the return of the total denim look, platform shoes and above all, above all, the Levi’s 501. The influences of fashion left more trends then ever, beginning with Kendall Jenner, great expert fashion vintage inspirations. Other trends, such as the arm bracelet or the Lulu Castagnette sweatshirts remain a vague memory. We decided to refresh your memory! You remember? (Read More)

From Levi’s 501s to denim jumpsuits, the ’90s were the golden age of denim. Anyone who might think denim is too much, it wasn’t back then.

As the ’90s marked the end of a crazy glitter era defined by bold styling, colors and silhouettes, the period sought to embrace the’ less is more ‘mentality by popularizing neutral colors and street style minimalist, Calvin Klein style. Think about a white t-shirt, a good pair of jeans, and some sneakers and you’re good to go.

No ’90s outfit would be complete without a hint of cheetah, gingham, or newspaper print popularized by Galliano. To add pep to an otherwise minimalist outfit, we don’t hesitate to play with different prints and patterns.

Some of the most iconic couples of the 90s, including Victoria and David Beckham, Courtney Love and Kurt Cobain, J. Lo and P. Diddy, were all dressed in matching outfits. Not to mention the many times Brad Pitt has even gone so far as to adopt the same hairstyles as his girlfriend.

Before the 90s, the total leather look usually meant that you were about to ride a motorcycle. But David and Victoria Beckham have proven that full leather is a lot more chic than you might think.

The most practical and versatile outfit of the 90s was the slip dress. The latter can be worn with heels as well as sneakers, making it as timeless as jeans.

In the 90s, we saw the rise of the “working girl”, as well as the brands launched to support it, such as Donna Karan. The costume quickly became popular with both men and women, as in the 90s it was both serious and sexy.

Baguette bags and minimalist details, the 90s were the era of small accessories. Today, Jacquemus has taken over.

We thank Lady Di for signing the birth of the athleisure trend. But also our favorite ’90s singers for making jogging pants socially acceptable.

10 Fashion trends from the 90s that we are adopting now

The denim jacket, the high waisted shorts, the crop top, the overalls, the scrunchie, the flannel shirt …, here are the 10 essentials of the 90s looks of our pre-teen wardrobe that we can (finally) come out!

Comfortable and so easy to match (a short fluffy sweater and off you go), it can be declined to infinity.

We cursed it for a long time because it (too) highlighted our buttocks, but we forgot how much it emphasizes the waist …

We prefer it today with a skirt or high waist pants, because we no longer show our navel, we have grown up anyway. Though.

We thought he was lost forever? This is wrong, the darling is back in force. It’s time to bring out your collection!

The guys with shoulder-length hair

Mid-length hair (and a little oily) is what we will see more and more in our men. We are announcing a big hype comeback from Orlando Bloom! Where it is played well is that he has not changed his cut since 1994, confident in the inevitable cycle of fashion.

Whether it’s the Dr Martens or the real army boots, they are coming back in force and we will not deprive ourselves to dust them off.

This loose and comfortable jogging which stuck to Mel C, has been on top again for a few seasons. We do not need to pray!

Warm and soft, it reminds us of our pajamas or our daddy’s shirts. This year, in a dress in the summer and an underlay in the winter.

There, we will have to browse to find a vintage one, a little long, a little oversize: the best is to steal one from a guy!

The cap on the side

Here is a trend that will not cost too much, we get our caps, we wear them on the side and we prefer them colored.

How did the 90s shape fashion today?

It’s been a decade that has inspired fashion a lot in recent years. It must be said that the 90s were the first to mix fashion and pop culture in a way that still resonates in our locker rooms today. We have therefore given you a non-exhaustive list of everything that marked the fashion of these blessed years.

The 1990s will forever be the era of supermodels . Tops like Cindy Crawford, Naomi Campbell, Christy Turlington and Linda Evangelista – whose famous line “ I don’t get out of my bed for less than $ 10,000 a day ” will be remembered – dominated the catwalks and attracted attention of the whole world.

The Supermodel shots taken by photographer Peter Lindbergh in the early 90s are still a major source of inspiration, especially at the editorial level. Without forgetting the video “Freedom 90” by George Michael, in which we find several of the legendary Supermodels. In our opinion, one of the greatest music videos ever made.

Fashion icon of the 90s, Madonna never ceases to amaze with her rebellious and provocative style. If his stage costumes surprise, it is his daring conical corset, created by Jean Paul Gaultier especially for his Blonde Ambition tour, which will unleash criticism.

After each episode of the famous Beverly Hills series, 90210, Americans across the country flocked to the stores closest to their homes to copy the looks of its characters. From Brenda’s bangs, to bodycon dresses to Donna’s scrunchies, the looks of the high school students at Beverly Hills High directly influenced the trends of the time.

Quirky, quirky-styled characters seen in teen television series have unwittingly become true sources of inspiration for women around the world. With their styles dubbed “weird”, they prove once and for all that style is more about attitude than clothing. Blossom Russo will be remembered as a hat addict, Clarissa Darling as the one who didn’t hesitate to mix prints and Kelly Kapowski as the ultimate proof that a crop top can be chic for any occasion. Without forgetting Kelly Bundy from the series Married, two children and Lisa Turtle from Saved by the Bell.

Seattle’s Grunge King and Queen, Kurt and Courtney are arguably the most influential couple in ’90s fashion. Courtney Love was famous for their ripped and see-through dresses, very dark looks, short dresses, and is the one who popularized the “kinderwhore”, a very popular dress style in the 90s. Likewise, the singer from Nirvana is the forerunner of the grunge trend. A legendary couple.

She’s the 90s It-Girl. At the start of the decade, the actress embodied legendary roles, notably in Edouard in the Silver Hands and Generation 90, while her tomboy style quickly took notice. Her boyish-cut hair and black total-looks have become her signature. The fact that her then boyfriend was none other than Johnny Depp only heightens the fascination she exerts then.

The Prince of Bel Air

Colorful tracksuits, Zubaz pants, an impressive collection of Jordans… Via the television show The Prince of Bel Air, Will Smith is becoming a real trendsetter. Hip-Hop group TLC makes frequent appearances on the show, also influencing viewers with their extra large t-shirts and colorful shorts.

In the early 90s, a young Londoner began her modeling career, without knowing that she would change the world of fashion forever. With her slender figure and androgynous look, Kate Moss is the antithesis of the Supermodels of the 80s and 90s. His advertising campaign for Calvin Klein will have the effect of a bomb, immediately making a fashion icon.

The ancestor of electro strongly influenced the fashion of the time: flare jeans, colorful jewelry, and rainbow-colored clothing to celebrate peace, love and respect. We want more.

With her half-granddaughter half-rebellious style, the American actress marked her time like no other celebrity. She drew on stylistic ideas from the various societal movements of the time, in particular the grunge of which she adopted dark makeup and tattoos, or the hippie movement.

The History Of Tattoos – Trendy Tattoo Design For Everyone